Ah, back in Tonganoxie.  Traveling to a city like Chicago always reinforces how glad I am that I live in the middle of nowhere.  Surrounded by miles of concrete and buildings and millions of people makes me claustrophobic.  It also makes me feel small.  I get the sense that I am just one small ant in a massive ant hill.  I know some people live for the bustle and movement of the big city.  Me, I'll take the less hectic route through life.  I enjoy knowing the woman at the check out counter at the grocery store.  I like meeting friends every few feet when I walk through the city park.  There is a comfort in the smallness of this corner of the world.  I can breath here.  Maybe I am not made for greatness, but I am content with what I have here; my life, my family, my home.

I did enjoy watching my kids experience the city.  They adapted very quickly.  I looked at Caleb and could almost see him like some street-wise character from a movie.  Of course, he wasn't all that street wise as several times he attempted to place himself directly in the path of oncoming vehicles.

The kids loved the Shedd aquarium and the Museum of Science and Industry.  I realize that you don't get stuff like that in the small town.  I suppose that's why we occasionally venture into the big city.

I just wonder sometimes if we aren't somehow spoiling our children by taking them too many places.  It seems like the more we go, the less they appreciate what they are getting to do.  I was in awe when I first went to Chicago as a teenager.  I don't think they experienced even the slightest twinge of real excitement.  Sure, they had fun, but for them, it was just another trip.

The  again, maybe things will not always be so easy to do.  Maybe the economy will come crashing down even worse than it already has and traveling with 5 kids will become next to impossible.  I guess I should be thankful or the ability to do these things as a family while time and money permit.

In the end though, I realize how blessed I am with a wonderful wife who makes me take fie great kids on trips that I would never be willing to take without her prodding.  I come back from them all a little tired but very aware of the great riches I have in this little troupe we call a family.  You can take all the fame and wealth the world offers you.  You can live in your up-scale hi-rise department on Lake Shore Drive.  We're good just the way we are in our little town in Kansas.

Ahhh Chicago. The last time I was here Barak Obama was some community organizer running for the senate. I actually walked past one of his big promo events and remembered thinking what a weird name he had. That was summer 2004, this is the fall of 2011. I definitely. Prefer the summer weather to this cold rain. 48° never felt so cold before. I think October in Chicago is like March in Seattle with hurricane force winds. The kids seem to be troopers though and as of yet have not been overly whiny about the rain and cold. Okay, enough blogging from my iPhone. Gonna call it a night and maybe tomorrow I'll take more pictures. Unfortunately I left the camera at home. 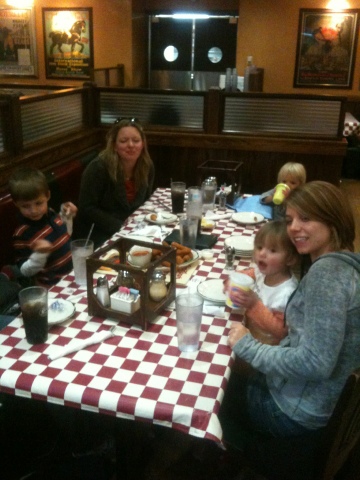 This week at church I preached my second-ever sermon.  I know that I am not made to be a preacher.  I don't like being in the spotlight.  I could write sermons.  I have plenty of opinions and am not at all afraid to say what I think.  I just don't like being front and center.  I don't like to be looked at and watched.
When I started dating my wife, my future brother-in-law used to call me Preacher Bill.  I'm sure he meant it with the utmost respect, however I had never preached a single sermon in my life.  I remember going to Christian youth camps as a young teen and they had this this called the "Young Preacher's Club".  I always wanted to give it a whirl, try my hand at the whole fire and brimstone thing, but I was simultaneously terrified of getting up in front of people.
Now twice I have filled in for our Pastor while he was away for various reasons.  I have learned a lot of respect for him and what he does just on Sunday morning.  Add in all he does the rest of the week, and I don'r know how he manages to do it week in and week out.  The same goes for all pastors.  This is pastor appreciation month, and I can't think of a group of people who deserve out appreciation more than pastors.
Pastoring used to be a highly respected profession.    Many of the founders of the country were pastors.  Pastors were the ones who people turned to for guidance and insight, for counseling and encouragement.  They held the nation together through times of tragedy and pushed us to be a better people.
Today is is most common to see a pastor on TV or in a movie portrayed in a much more disrespectful light.  Hollywood would have us see pastors as backwards and uninformed.  They might be good intentioned, but usually are made out to be hypocritical and scheming snake oil salesmen, who bang on a big Bible and then secretly bed their secretary or live high on the hog off the Social Security checks that their brain washed elderly parishioners send them dutifully each month.  Their children are also usually the most rebellious and promiscuous kids in the local school.
Sure there are always examples of pastors who have blown it, and I have known my share.  The fact remains though that most pastors serve God faithfully their whole lives, with little or no recognition for the amount of time and effort they pour into their work.  The work long hours studying and preparing sermons and lessons that people will listen to with glazed over eyes.  The are always visiting at the hospital when anyone gets sick.  They get called in the middle of the night.  They spend hours listening to people's problems and seldom have anyone think for a moment that they might occasionally be dealing with some of their own.  It is for the most part a thankless job. Many times they don't have a lot of close friends, because I think most people don't feel comfortable around them.
I just want to go on the record and say that I am lucky enough to have two amazing and hard working pastors who are as above reproach as men can be.  They deserve a ton of praise for all they do.  I don't know how they keep going week after week and still do such a great job at being husbands and fathers.  They are men of God who put Him first in their lives and live out their faith boldly and without hypocrisy.  Thanks Mike and Mark.  I am proud to know you and call you both friend.
So anyway, I preached as a fill in for Mike this week.  It was a privilege.  I don't know if anyone else got anything out of the sermon, but I know that I needed to hear what I had to say.  I'll post a link should anyone else want to listen.
Living For Christ In A Hostile World - Sunday 10/9/2011
Posted by DrDad at 3:57 PM 1 comment: