I was terrified of having a daughter.  I think I still am to a large extent.  Despite a decade of medical education and another decade of practicing medication, I still have this fear of my little Gracie growing up and going through the whole puberty thing.  She already seems to possess far more attitude and drama than something so little and cute should possess.  Karlye tells me I give in to her way too much and that I let her get away with far more than I do the boys.  I outright deny that.  Okay, maybe I do have a little bit of a soft spot for my only little girl.  After all she is a miniature copy of her momma.

Gracie is a daddy's girl.  She and I have a really great relationship, usually.  I would deny she has me wrapped around her finger; others may claim otherwise.  I know that I cherish her kisses and hugs.  I love to snuggle with her when we watch TV.  I love her complete trust and innocence.  I also know that she's growing up so fast.

She has a temper, that's for sure.  Mommy feels the brunt of it more than I ever do.  Those two go at it all the time.  I have to admit it's kind of entertaining to sit back and watch the battle of the wills.  She is far less likely at this stage in her life to defy or talk back to me.  Oh sure, she gives me attitude too, but usually it's more subdued.

Bedtime though is another issue.  Grace hates going to bed.  She fights it with her whole being.  I know she's exhausted, Karlye knows she's exhausted.  She just doesn't realize it.  She can stay up way after the boys drop to sleep.  She's constantly getting up to ask us questions, use the bathroom, look for her blanket or a toy to sleep with, basically any excuse to avoid lying in bed.  She sneaks her iPod into bed and watches Sponge Bob on Netflix or plays some little dress up game under the covers.  She hides in her closet and plays with her dolls.  It's been a major challenge just to get her to lay down and go to sleep.

Recently though, I have discovered a unique talent that I have.  If I take the time to lay down beside her in her bed, I can have her to sleep in 5 minutes or less.  It works like this.  I confiscate the iPod.  She flips out and throws a minor hissy fit for about 30 seconds.  I have a Pandora station set up that plays Disney movie songs.  I put that on and place the iPod out of her reach.  I then ask her about her day.  She does calisthenics and throws her body into spasms all over the bed letting me know how "not tired" she is and how it's "not fair" that she has to sleep in a room by herself.  This lasts about a minute or two.  By the time the "Under the Sea" finishes playing, she has mostly calmed down enough to lay still enough for me to start rubbing her back.  She assures me a few more times that she is not tired and that she doesn't want me rubbing her back.  Then after a few more seconds I hear her breathing slow down and I feel the tenseness of her muscles relax.  At that point I know I've won.  By the end of the second song, she's out like a light.  I like to lay there for a few more minutes listening to her soft quiet breathing.  I see only my precious innocent little girl and I want to freeze those moments in time forever.

I know that I will only be able to pull this off for a very short time. She's growing up too fast.  I wonder how our relationship will develop over the next few years.  Will I still be able to calm her down when she's ten years old and upset?  When she's fifteen?  Will she come to me with her worries and concerns?  Will her daddy become less relevant to her as she gains friends and loses her childhood.  I honestly don't know.  I will do my best though, to stay involved in her life.  I will listen when she has things she wants to talk about.  I will try to protect and comfort her through the difficult and trying times that I know are coming.  Will she appreciate it?  At times probably not.  She will probably fight me and tell me she doesn't want me getting involved much like she does now at bedtime.  The trick will be striking a balance between letting her grow into more freedom and independence, without losing the closeness we have between us.

I wish I knew more about raising little girls.  Unfortunately I think I'm going to have to figure this one out as I go.  I have a great wife who can help me out.  I know we both will make mistakes, but it sure feels good when we get something right from time to time. 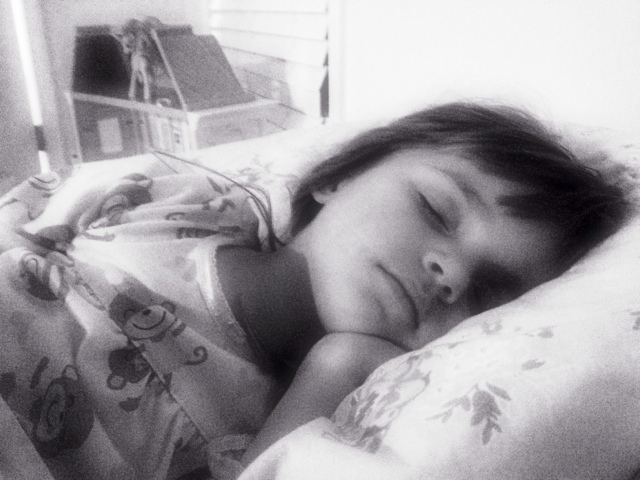