The boys have been studying astronomy in science. Caleb was supposed to make a solar system poster to compare the different planets. That's all well and good, but we decided to take it a little farther. Why be content with a poster when we could make a scale model of the solar system?

Our first step was to make scale models of the planets. I helped out by making a printout with the planets scaled to an 8 inch sun. Caleb then used Model Magic to sculpt out the planets to match up. 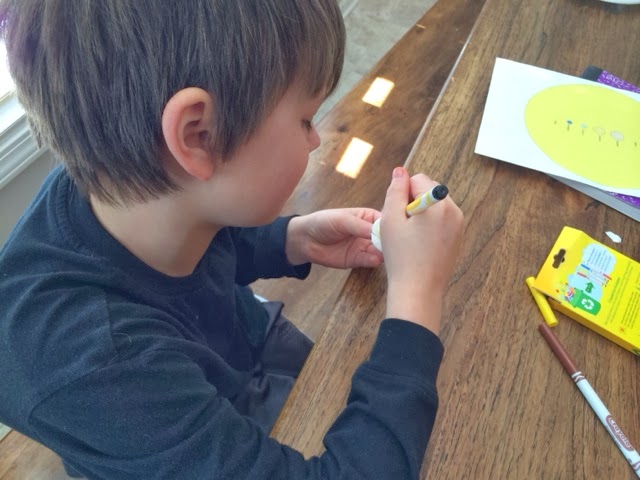 Mercury and Pluto were tiny. Less than 0.5 mm in diameter. Jupiter and Saturn were a little over an inch in diameter. 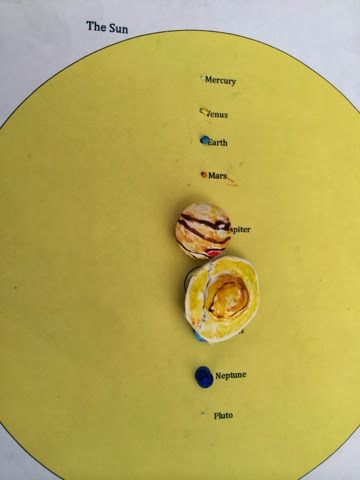 Next we attached them to dowel rods. 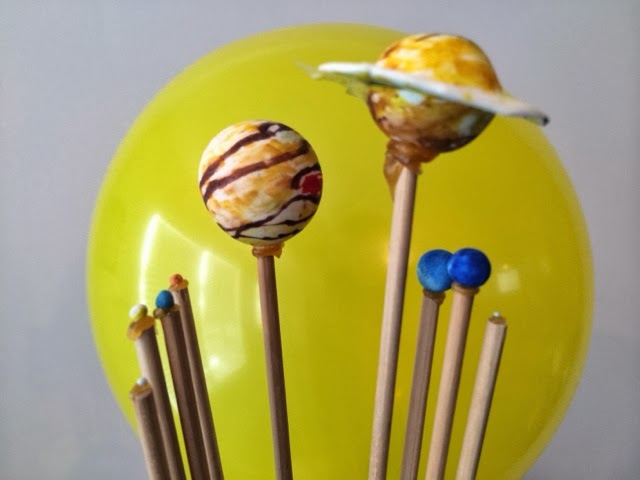 Here they are in order with an 8 inch yellow balloon in the back to represent the Sun.

So far so good, but I wanted the boys to get an appreciation of the immensity of the solar system. I forced Will to sit down with me and calculate the planets' distances from the Sun. Based on the sun being 8 inches (20 cm), we were using a scale of 7,000,000,000:1.

We headed out to the end of a road near our house. We placed the Sun near the stop sign so we would have a good reference point from farther away. 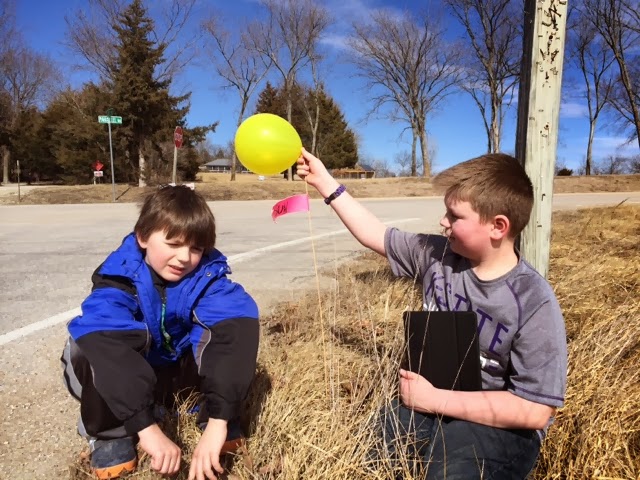 Now we moved 8 meters away. This reflected Mercury's orbit. 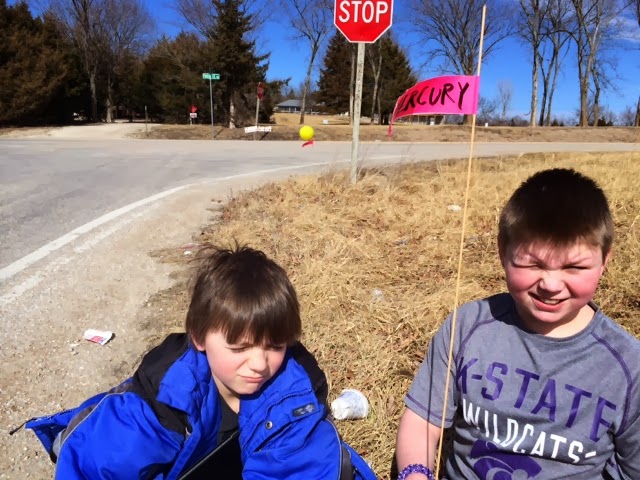 Here is the closest planet, burning up in the Sun's heat. Hard to believe when you are looking at a speck the size of a poppy seed 25 feet away an 8 inch balloon.

Next we moved out to a distance of 15 meters. This is where we placed Venus. 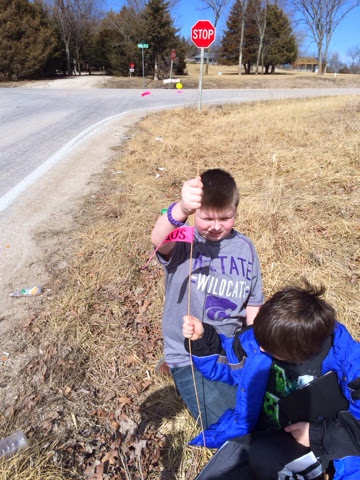 At this difference the average temperature is 860°F!

Next we moved out to place Earth it it's place 23 meters away from our Sun. 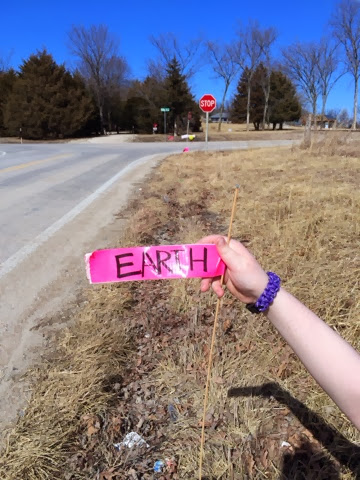 If you zoom in on the picture you can see the Earth model and the Sun. This will give you an idea of the scale. I was starting to feel pretty small. 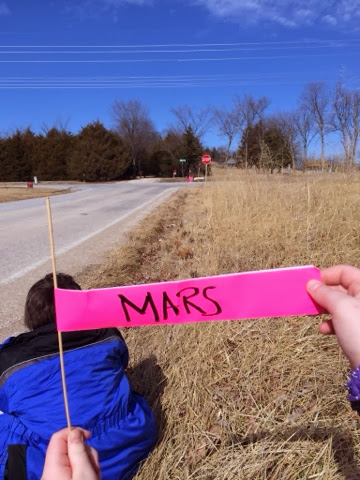 Mars on this scale would be another 10 meters farther out. Zooming in, you can still see the sun, but it's getting difficult. Mars is the last inner planet. To understand why it's called that we just need to move out to Jupiter's orbit. 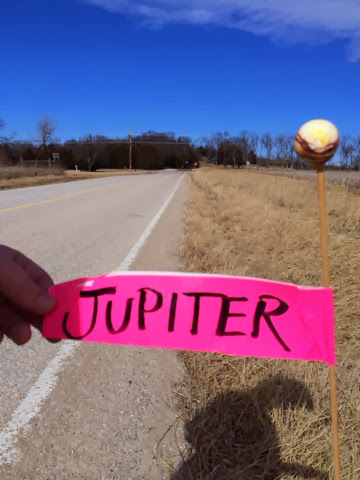 We are now 111 meters away from the center of our solar system. The Sun is just a spot now.  We are almost 5 times farther away than the Earth. 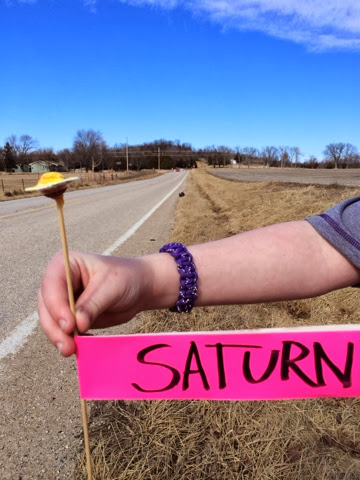 Saturn is almost twice as far away as Jupiter at 205 meters. Oops!  We lost Uranus somewhere along the road, bu at least we could still mark it's orbit at 411 meters out. That's twice the distance of Saturn. No wonder no one discovered this 3rd largest planet until the telescope was invented. 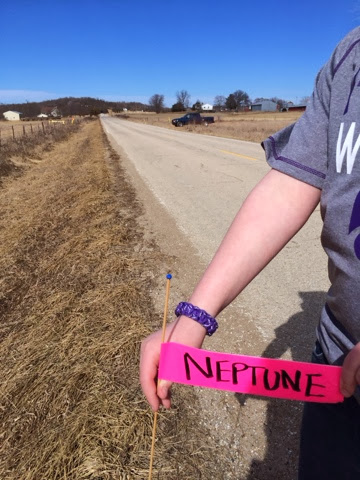 With Neptune we were really starting to get far away. 643 meters out. We could barely see the stop sign, let alone the Sun. This is the last of the planets these days. Now Pluto is the first of the dwarf planets. 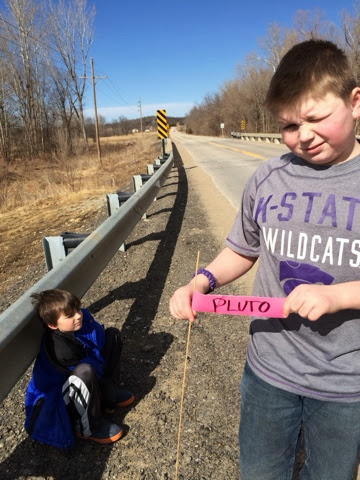 Over a kilometer away from the Sun in our model at the farthest part of its orbit (845 meter would be the average), Pluto appeared a mere speck lost in space. And while that's as far as we went with our model, the solar system goes out much further.

Beyond Pluto lie Haumea, Makemake, Eris, and Sedna which at it's furthest point would be 20 km or 12 miles away on our model.

If you really want to be overwhelmed, on this scale the next closest star Alpha Centauri A would be somewhere in Panama 3600 miles away.

I hope the boys got a good sense of the sheer enormity of space.  Even with this I really cannot comprehend such distance.
Posted by DrDad at 2:17 PM