The Vacation - Part I

Well, it has begun.  I'm sitting here waiting for our plane to arrive, risking bodily harm for not paying close enough attention while I type.  Karlye is in her hyper-alert drill sergeant mode that she assumes whenever we travel en masse.  I'm not letting it bother me, because I realize that if left in charge, there is a good chance that we would leave a child somewhere. 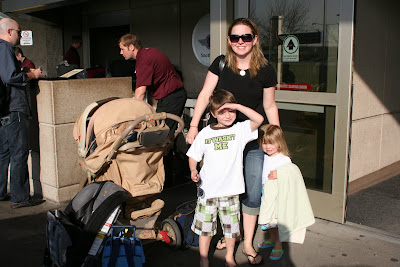 I am remarkably relaxed for traveling with all 5 kids.  We've never attempted it with that many.  Our previous record was 4.  Usually I'm a bundle of nerves.  I'm not sure why.  The kids generally behave better in public than at home.  I think I just don't want people to see the chaos that we accept as normal.  I think I also hate the looks that we get from people when the see us checking a small moving van worth of baggage through security.  I know what they are thinking.  They are afraid we will sit behind them.  I think that they have heard the story of the gooey chocolate chip cookie that one of our sweethearts flung at the back of some business mans head on a certain Midwest flight.  They are afraid that someone will scream for the entire 3 hours of the flight.  I hope not.  No guarantees, but so far so good.  Karlye has confirmed that we are the only family with children on the plane.  All eyes will be on us.  Maybe we will sit near the engine... 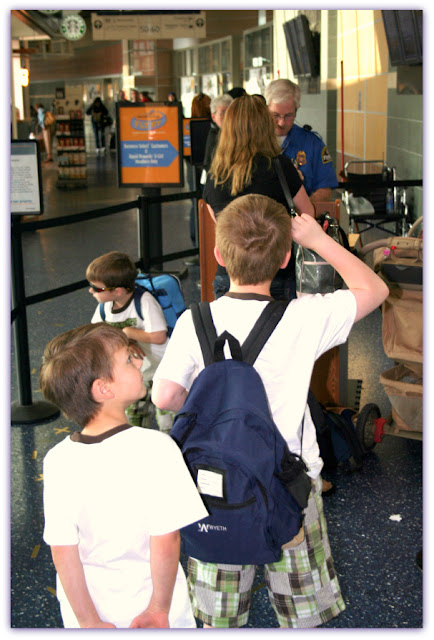 Now we are cruising at 30,000+ feet.  Ours aren't the only kids.  I still heard a couple of snarky comments as we boarded the already mostly full flight.
"At least I wont be the only one screaming when the pressure changes."
"Let me know when you start crying, I'll join you"

We're flying to Florida, so Grandma's and Grandpa's outnumber us all.  They are forgiving.  You can see the look of understanding tinged with guilt.  They have been there before.  Most have just just spent a week fulfilling their grand-parental duties.  They've loved on little Johny and Sue until they've has their fill and are fleeing back to their sunny retreat far away from the phone calls asking, "Do you think you could watch the kids for us tonight?"
I personally love hearing kids scream on planes, as long as they are not mine.  That way I know that I am not alone, that my kids are not abnormal.  Right now though it is mine who is starting to squeal.  Elijah is trying to make up his mind if he is happy or very upset.  He's giggling a lot and occasionally the giggles transition into an irritated shriek.  I think he's had his fill.  Only an hour to go.  Grace and Josiah have gotten bored watching Tangled on my phone and are now giving the men in front of them shiatsu massages through the seat with their feet.  Ahhh, yes! I just heard a howl from several rows back.  It was a big one too; I'd say a 9 or 10 year old by the sound of it.  My two oldest have been perfect.  Thank you so much Nintendo.  Thank you for making us Nintendo Brand Ambassadors,  Thank you for flying Karlye and I to Seattle and showing us around your headquarters, but mostly thank you for giving us two free Nintendo 3DS's.  It's like we hypnotized Will. 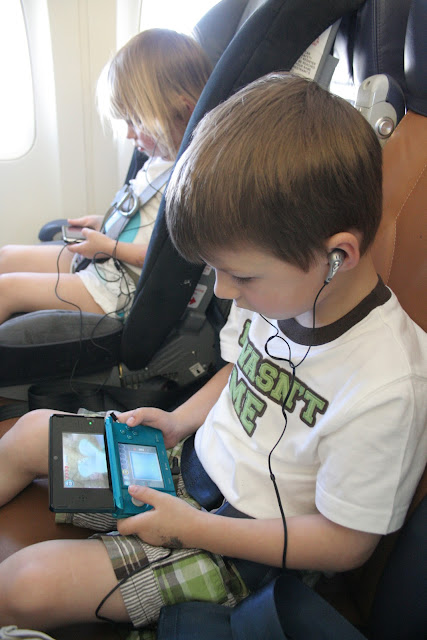 Well, the little girl 3 rows back is really making a scene now.  Keep it up honey, everyone is watching you and not my kids.  Yeah, I saw that dirty look you just shot back there buddy, now aren't you glad it's MY kid your sitting in front of?
Fifty minutes left.  I'd love to take a nap, but I think that's considered child neglect on a plane isn't it?  Karlye is running back to the restroom and Elijah is on the opposite of the plane from me really starting to get worked up.  I can't get to him, so I'm just trying to make faces to quiet him.  It isn't working.  I'll pretend I am not related.  No, that's not working  either.  The look alike kids in look-alike clothes are giving me away.  Wait, he fell asleep.  Just like that.  Nice, I'll tell Karlye I just have a skill with babies that she doesn't possess.  I'm sure she'll buy that.
Now Caleb is bored and starting to whine.  We are starting to descend.  The worst is almost over and it wasn't that bad.  I'll keep you posted.
Posted by DrDad at 10:05 AM